Soil Fumigation can be generally described as the operation where volatile liquids are injected into the soil profile where they transition to gas. The gas then penetrates the soil by moving through the soil pores coming in contact with the target pathogen. Ultimately, Fumigation objectives are to manage targeted pathogens and promote healthy growth allowing growers to meet their cropping goals: Uniform Crops, Healthy Plants, Maximize Growth Potential, Production, and Economic Return.

Many common soil-borne issues can be controlled with fumigation, such as: 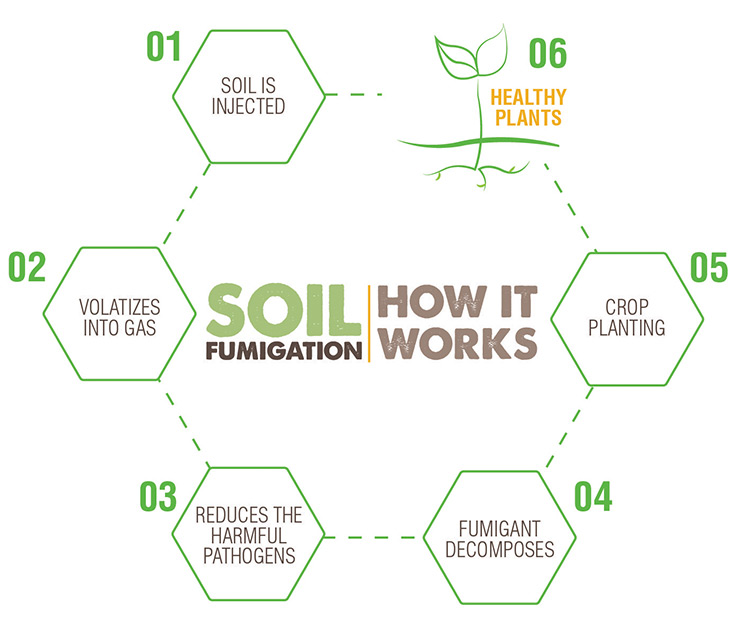 A basic overview of how fumigation conditions the soil for planting and optimum plant health.

1. Fumigants are injected as liquids into the soil to control harmful fungi, bacteria, nematodes, and insects that have invaded a field.

2. The fumigant volatizes into gas diffusing through the soil air space, radiating out from the points of injection.

3. The treatment significantly reduces the harmful pathogens and rebalances the native beneficial soil microbe population, conditioning it for planting.

4. The fumigant decomposes rapidly in the soil; and some fumigants, like Chloropicrin, actually biodegrade into plant nutrients.

6. Healthy plants are able to maximize their water and nutrient use and grow to full yield potential with no uptake of fumigant into the plant root or residue on the plant.

Sealed system application usually takes place the previous autumn or in the spring three weeks to a month prior to planting.

This allows time for the fumigant to achieve its task, break down in the soil, creating a clean growing environment for the plant roots, resulting in healthy stronger plant growth.

Soil fumigants, allow the beneficial organisms to thrive while suppressing the repopulation of the damaging pathogens that could negatively impact the grower’s yield.

Considerate to many beneficial soil fungi and bacteria such as Trichoderma, Bacillus, and Pseudomonas species.